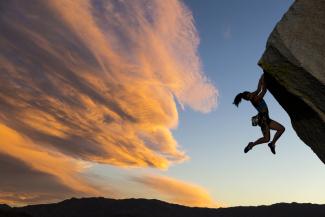 Webster dictionary defines endurance as the “ability to withstand hardship or adversity, especially the ability to sustain a prolonged stressful effort or activity.” The ability to endure trials and tribulations is vital if you want to experience victory. We learn and grow through adversity.

Loyalty and vision are also critical components of endurance. Do you believe in your mission? Do you have goals? Do you have a plan? If your vision is clear, you will stay loyal to your calling.

Sir Ernest Shackleton led an expedition to the Antarctic on the ship Endurance. After it got stuck in ice, the men drifted on an ice floe for over a year before landing on Elephant Island. Sir Shackleton left the men on the island to find a rescue boat and returned three months later to rescue his crew. All the men survived.[1]

Abraham Lincoln lost several elections before being elected the 16th President of the United States in 1860.

Harriett Tubman escaped slavery and made 13 missions to rescue approximately 70 slaves through the Underground Railroad. She also helped John Brown recruit men for the raid on Harpers Ferry.[2]

Louis Zamperini was a World War II veteran and hero. His plane was shot down over the Pacific Ocean, captured as a prisoner, and held as a prisoner of war in Japan until the end of the war in 1945. His pain and suffering were detailed magnificently in Laura Hillenbrand’s book Unbroken: A World War II Story of Survival, Resilience, and Redemption.

J.K. Rowling battled poverty and depression to become the first billionaire author, the author of the Harry Potter series.[3]

Bethany Hamilton was attacked by a shark and lost her left arm. Her harrowing story of survival is portrayed beautifully in her book Soul Surfer: A True Story of Faith, Family, and Fighting to Get Back on the Board.

It’s hard to imagine what it’s like to endure a prolonged bear market, especially when stocks are up more than 20%.  Not only is the market up significantly this year, but it has also risen 353% since March 2009. It’s now the longest-running bull market in history. It’s easy to stay the course when things are going well.

The significant returns we’re enjoying today were birthed from one of the worst bear markets in history. From 2007 to 2009, the S&P 500 fell 56%. The Great Recession is still raw for many investors.

A return below 5% doesn’t sound great, but it’s a positive number, and you doubled your money. What if you diversified your portfolio and added a few more asset classes? A balanced portfolio of large, small, and international companies mixed in with a few bonds and real estate holdings, rebalanced annually, produced an average annual return of 7.26% per year.[4]

If you’re not willing to endure the difficult times, you can play it safe and invest in short-term U.S. Treasuries. The iShares U.S. Treasury 1 – 3 Year Bond Fund (SHY) has returned 1.10% to shareholders for the past ten years. A $10,000 investment a decade ago is now worth $10,110 – safe and sorry.

It’s impossible to predict when a bear market will arrive., so don’t try and time the market. Bear markets are part of investing, but if you dare to hold on to your investments during difficult times, you may reap the benefits when stocks recovers.

Rejoice in hope, be patient in tribulation, be constant in prayer. ~ Romans 12:12

Bill Parrott, CFP®, CKA®, is the President and CEO of Parrott Wealth Management located in Austin, Texas. Parrott Wealth Management is a fee-only, fiduciary, registered investment advisor firm. Our goal is to remove complexity, confusion, and worry from the investment and financial planning process so our clients can pursue a life of purpose. Our firm does not have an asset or fee minimum, and we work with anybody who needs financial help regardless of age, income, or asset level. PWM’s custodian is TD Ameritrade, and our annual fee starts at .5% of your assets and drops depending on the level of your assets.