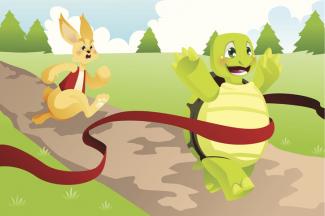 The Hare, The Tortoise, & Stocks

The Hare and the Tortoise is a classic Aesop fable. A story we know well.  The hare mockingly asking the tortoise, "Do you ever get anywhere?" Of course, we know how the story ends. The tortoise "kept going slowly but steadily, and, after a time, passed the place where the Hare was sleeping." Practicing a life of slow and steady is harder than it looks. We are an impatient nation addicted to getting our way as quickly as possible.

I recently lost a client who wanted to arrive at the finish line faster than scheduled. He mentioned a relative who was investing in growth stocks and generating returns of "20% to 30% or more." Since the market low on March 23, the NASDAQ has risen 71%, and stocks like Shopify and The Trade Desk have risen more than 320%. The recent pandemic has turned Robinhood traders into stars, and one celebrity repeatedly mocks Warren Buffett and has said, "Trading is easy."

The curious thing about my call with my former client is that it resembled one I had with another client in December 1999. At the time, the NASDAQ had risen 53% in two months as investors speculated on internet and dot com stocks. He, too, wanted to grow his account faster. He was not satisfied with his returns, and he felt like he was missing his chance to strike it rich. The NASDAQ would rise another 24% as it reached a peak in March 2000. The NASDAQ would fall 78% before it hit rock bottom in December 2002. If you invested at the market top in 2000, you had to wait sixteen years before the index eclipsed its previous high.

At times, I think it's easier to make 50%, 100%, or more in short-term trading bursts than earn 8% for 10, 20, or 30 years. It's possible to catch lightning in a bottle, but the key to creating generational wealth is how you react after a market crash. How many investors in 1999 remained invested for sixteen years to recover their costs or buy stocks at low prices? My guess, not many.

When the market corrects, the slow and steady crowd takes over, systematically investing while following their plan. Warren Buffett said, "The stock market is a device for transferring money from the impatient to the patient."

Individuals who complete a financial plan are likely to stay invested through good markets and bad. If you don't have a plan, you may panic and sell your stocks when times are tough. In March and April, we fielded several calls from clients who wanted guidance on how to handle the sell-off. We reviewed their plans and told them to remain invested because the market correction did not impact their financial goals.

The hare lost the race because he was impatient and overconfident. If he had a plan and followed it, he would have beaten the tortoise by a mile, and Aesop would not have written his famous fable.

The race is not always to the swift. ~ Aesop Fable