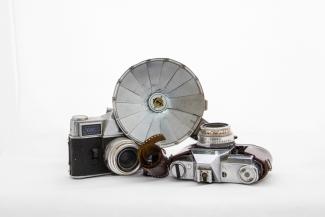 The price of Kodak soared because they received a $765 million loan under the Defense Production Act so it can begin producing pharmaceutical ingredients.[1] I had no idea they manufactured drugs. Oh, and on the day before Kodak announced its deal, the board of directors awarded its chairman 1.75 million shares of company stock.[2]

Eastman Kodak was founded in 1888, 132 years ago, primarily to produce film for cameras. Eastman Kodak was a powerhouse, a blue-chip. They were added to the Dow Jones Industrial Average in 1930, where it remained for seventy-four years. Eastman Kodak was part of the nifty-fifty, a group of high-flying growth stocks, during the 1960s and 1970s, along with Bristol-Myers, Coca-Cola, GE, IBM, Pepsi, Pfizer, Sears, and Xerox. In 2012, Kodak declared bankruptcy, and one year later, they emerged from bankruptcy protection, a different company to focus on five divisions: print systems, enterprise inkjet systems, micro 3D printing and packaging, software and solutions, and consumer and film.[3] Pharmaceutical manufacturing is not one of their stated divisions.

My first photography class was in 8th grade. I borrowed my aunt's 35 millimeter Pentax camera for a school project. I went to Thrifty's Drug Store to purchase a roll of black and white film. When I finished my project, I dropped off the film at the drive-up Kodak kiosk in the mall parking lot. I returned a few days later to pick up my pictures – a few I still have today. When I became a stockbroker in the early 90s, Kodak (EK) was one of the first companies I purchased. It was going to be a cornerstone of my portfolio because of their growth prospects and dividend yield.

The recent move in Kodak shares may tempt you to hunt for undeveloped stocks in hopes of quick riches. Before you take the plunge and start buying low-priced, speculative stocks, here are a few suggestions to help you avoid some common mistakes.

Kodak was a juggernaut, generating more than $10 billion in sales in 1981, employing more than 120,000 at its peak, and producing 50 million Instamatic cameras between 1963 and 1970.[4] However, it lost its way, and it's now trying to rebrand itself – again. I don't know how Kodak's deal will develop, so tread lightly and be careful.